Quotes:
>>FULLERTON — A proposed $19-million church expansion at the corner of Brea Boulevard and Bastanchury Road does not have everyone’s blessings.

Neighbors in the adjacent President Homes met to oppose plans by the First Evangelical Free Church of Fullerton to construct a 20,000-square-foot multipurpose building, a 21,640-square-foot administrative building, a three-level parking structure for 787 vehicles and a future parking structure for 227 more autos.
[snip]
Jenni Key, a church employee, said the congregation also bought a retail center to house classrooms and offices.

"Then as now, the purpose was not to increase the number coming to our church, but to better serve those already in attendance," Key said.<<
Posted by Kori and Ken Pellman at 8:26 PM No comments: 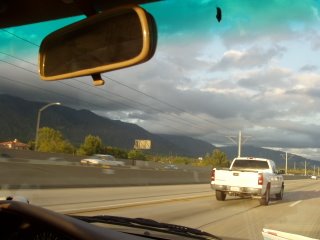 Okay, okay... we haven't been giving this blog the attention it deserves. I suppose I could list any number of reasons why. An obvious one is that I often have to eat in to my sleeping time to write here.

It was a fairly nice holiday weekend.

I think we just spent Friday resting and taking care of some chores at home.

Yesterday, Kori and I went to her parents' place for what we thought was going to be a too-short afternoon, since Kori's mother was scheduled to work. We had a great meal with her parents, her two sisters, the husband of one, and the boyfriend of another. Pam's shift ended up being called-off, so we spent more time over there. We played Outburst after the meal with guys v. gals.

Today, we went to the 11:30am service at church, which was wonderful. Then we took off to go to my mother's in Pasadena for an early Easter Dinner.

Coming off of the 210 Freeway westbound at Lake, we had a green light to go through the intersection on our way towards Los Robles We were in Kori's pickup truck. Some woman at the intersection, her car facing southbound, decides to pull in to the intersection against the red light, and head down the freeway onramp to join the westbound traffic. She not only failed to look before entering the intersection, she didn't even look at us as I slammed on the brakes. A split second later in my reaction time, and the corner of our front end would have impacted right where she was sitting. She was completely oblivious that she was almost smashed like an Easter egg.

We managed to make it to my mother's condo without any traffic accidents.

My brother, my younger sister (who got to work at 6am today...ah, I remember those days), my older sister, her husband, and their two boys were all joining us at my mother's, along with my mom's annoying dog. Yes, mother, the dog is annoying, and since I don't know the correct spelling of the dog's name, I won't attempt to type it here.

The food was great and I ate too much... as I'm prone to do. Most of us played a game afterwords, and still fewer of us caught the first half of "King Kong" on DVD. Egads, I knew Peter Jackson should have quit after "The Lord of the Rings". I mean, where do you go after you've made perhaps the best trilogy in cinematic history? Almost certainly downhill. And "Kong" was certainly downhill.

Thankfully, my wife tired of looking at real estate with my older sister on my mother's painfully slow desktop setup, and we made our way back to Anaheim.

The younger of my nephews, Macon (pronounced May-sun, believe it or not), is 13 years old and my goodness, his voice is so different from the last time I heard it, which couldn't have been too long ago. When he first came into the room and I heard it, I though someone else had tagged along... nope. He may end up with a voice deeper than mine. Yikes.

Anyway, the weekend is rapidly coming to an end. Maybe I'll be able to go back and fill in some of the rest of the details from this month another day.

How did I ever work a second job on weekends? This is the last major holiday that I'm newly enjoying free from working a shift. Since the Summer of 1990, I had worked all major holidays, and that ended in June of 2005. No more imploring the family to start without me and then having them schedule around me anyway.

-Ken
Posted by Kori and Ken Pellman at 9:17 PM No comments:

Quotes:
>>"This was the most challenging effort resulting from last year’s storms for this area," said Ken Pellman, the spokesman for the county’s Department of Public Works.

While the road was under repair, a pilot car would have to escort a dozen or so other vehicles at slow speeds through the road during rush hour because a portion of it ran on a bridge with only one lane.

"It was just to get these people through who depended on that road for their commute, because otherwise they would have quite a detour and that would have increased traffic on other roads," Pellman said. "This is an important link between Santa Clarita and the Antelope Valley."

A two-lane temporary bridge was completed and opened March 15, Pellman said, and the road had to be completely shut down for two weeks during its construction.

"The important thing is that we wanted to get two-lane traffic," Pellman said.<<
Posted by Kori and Ken Pellman at 11:11 PM 2 comments: