Attention All Residents of India

We don't need a new mortgage. Really. Stop calling us. And you aren't fooling anyone when you say your name is "Bob".
Posted by Kori and Ken Pellman at 8:22 PM No comments:

Anyone For Rabbit Stew? 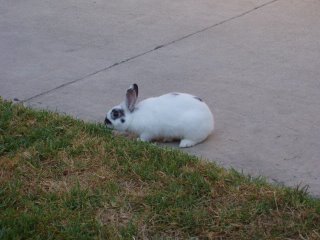 I got up this morning to move my car so Kori could park her truck in the carport when she got back.

What did I see as I was walking back to our front door?

One of the neighbors must not be concerned that their pet is hopping around eating grass where cats and dogs can easily get to it.

I'm waiting for chickens to start roaming the grounds. It wouldn't surprise me. 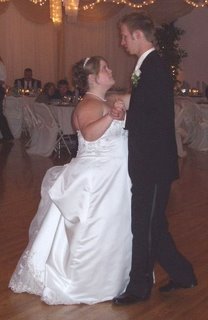 It's nice to pause and think about the courage and the vision that brought about the United States of America, where we can go to church without having to fear that some crazed person is going to run around cutting heads off, or that government soldiers are going to find us and send us to Siberia.

Kori and I had a rather busy June. She's working four shifts per week, and actually working more hours than me! How's that for a switch? We traveled out California twice in the month, going to Peoria, Illinois area for my grandather Kenneth's services, and two weeks later going to Dayton, Ohio area for my counsin-once-removed Chris' wedding to Alex. Hence, the picture. In both cases, it was nice to see family. Kori hadn't been to Ohio and it had been nine years since I'd been back there to see the kinfolk.

So, as we celebrate Independence Day, Chris and Alex are getting used to dependence on each other!
-Ken
Posted by Kori and Ken Pellman at 1:50 PM 3 comments: