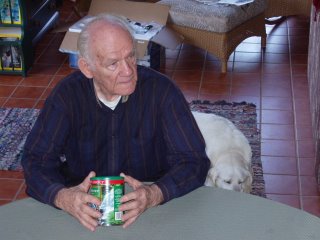 This picture was taken on our most recent trip to Illinois, last year.

My grandfather, Kenneth Palmer, my last surviving grandparent, passed away in Peoria, Illinois. He was just a few days past his 90th birthday.

He had been in fairly good health until a little over a month ago, maybe a little hard of hearing, but otherwise his mental faculties were there, he could walk, drive, etc.

Although he did make a try of it, he never really was able to move on from losing his wife of 60+ years, my grandmother, when she passed away a couple of years ago after a battle with cancer. Until the end, they had been an independent couple. He and grandma had moved in to a nice retirement community in the 1990s, something to which they had been looking forward for a long time.

Grampa estimated that he would have been dead before 90.

Grampa met my grandmother during World War II, while serving in the extremely dangerous California theater. Grandma had come to California, in part, to escape the cold weather of the middle of the country. My mother was born to them in California. My grandfather then dragged Grandma kicking and screaming back the Midwest, to Peoria, where they went on to have two sons.

Grampa is survived by his daughter, his elder son, eight grandchildren, and two great-grandchildren. His younger son passed away several years back due to complications of diabetes, and Grandma had been ready to go ever since losing her youngest.

Kori's mother and my mother are both unavailable today, so phone calls will have to suffice for the time being.

Yesterday, we spent the day at the beach (Newport Beach) with a few expectant mothers. One of the expectant fathers, James, was celebrating the big 3-0. Ah, I remember those days. I can barely see them in my rear view mirror. 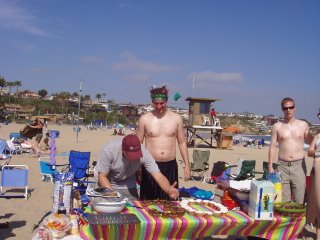 Anyway, it was nice day at the beach with food and sun. I was able to catch up with the birthday boy's older brother, with whom I'd worked for many years at Disneyland Park. He left in 1998 and went up to northern California for a "real" job, and we've stayed in contact via e-mail. I never made the connection between James (from church) and Adam until Adam noticed Kori and I on the evite. It really is a small world.

Friday, after the yummy green corn tamales, Kori and I tore out some of the weeds and vines that seem to be growing wo well in our backyard.

Now, we're just waiting for the washer/dryer repair man to come back for a second visit. ***[edit] Oh wait, I mean the Adelphia guy. Yeah, he's making a repeat visit, too, because some of the channels are not coming through at all, and some others are choppy. And to think they offer us Internet service, too. No thanks. the washer/dryer guy will be here a different day.

Okay, it's May 12 and we, just today, finally managed to get to Cafe El Cholo in La Habra so we could have our GREEN CORN TAMALES fix.

You see, they are a seasonal dish offered May through October. Not everyone understands why Kori and I like them so much. Different tastes for different folks, I guess. When my buddy Francisco visited from Chile several years back, I made sure he tried them and he said the reminded him of Grandma's cooking.

Ken was quoted in a recent article that appeared in several sister newspapers. It's a good article with great pictures online.

Quotes:
>>The dredging is needed to clear the area behind the dam that filled up with dirt after the Curve and Williams Fires of 2002, said Public Works spokesman Ken Pellman.

Without plant roots to hold it down, mud flowed down hillsides into the river and collected behind the dam, Pellman said.
[snip]
"The contract calls for the removal of 5 million cubic yards of dirt," Pellman said. The sediment-removal project kicks into high gear each spring when the storms stop and the San Gabriel River's waters subside, he said.

"Each year, before we release water, we have to give everything that collected behind the dam a little time to settle," he said. "Waiting for the settling keeps us from gumming up our system and it makes it so we let cleaner water go down stream."

The released water is siphoned into spreading grounds along the San Gabriel River near Pico Rivera, where it percolates into wells and is pumped up for use, he said.

The money for the dredging came from funds designated for flood control and water conservation, Pellman said.<<
Posted by Kori and Ken Pellman at 9:36 AM 2 comments:

Go to http://www.laughingplace.com/News-ID510340.asp to read Ken's review of _The Secrets of Disney's Haunted Mansion_, a new book presented by DoomBuggies.com.
Posted by Kori and Ken Pellman at 8:37 PM No comments:

What We've Been Up To 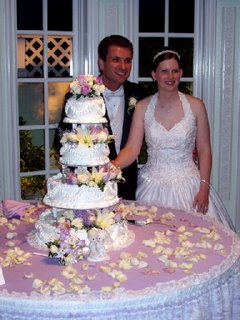 Last weekend was a tiring one. I left work at lunchtime on Thursday the 27th to that Kori and I could come home and prepare for Bob & Julie's wedding rehearsal and dinner. The rehearsal went well enough, and dinner was good. In addition to the main gift (I was Best Man), Bob & Julie blessed me with the how-did-we-ever-get-along-without-it Gillette Fusion [warning: Anglo-Saxon words are used in that link] Five Blade Razor, probably because 1)I'm hairy and usually sporting a shadow and 2) I talked a lot about it when I heard it was coming to the market. I just think it is hilarious when The Onion can predict the future so well.

When we got home, we found out that the moveable (it is on rollers and hooks up to the kitchen sink) washer/dryer unit that we bought online was broken again. This is the second time. We have to ask a repairman to come weeks or months in advance. Fun.

Friday (4/28), we ran some errands, including picking up the tuxes for Rick and I and Friar Tux in Lakewood. Prom season was evident. I picked up Rick's tux because he lives in Vegas now.

Saturday (4/29), Kori got up and went to have breakfast with her mom. Later, we went to my mother's for an early dinner. Late at night, drifting off to sleep, Kori and I were thinking of all of the horrible but funny things I could say during the Best Man toast.

Sunday (4/30), - Bob & Julie's wedding day! I got up and went to pick up Bob at 9am for breakfast, and after we ate I promptly dropped him off again at home.

We made it to the Garden Room an hour before the wedding - which was right on time. We didn't need to help seat people or anything, so it was basically hanging out waiting. The ceremony started and we took our places. Bob shed a couple of tears watching Julie come down the aisle. He spoke well, only having one slight stutter during the ceremony. I think he spoke more fluently than I did during my own wedding.

We made our entrances to the reception and remained standing for the toasts. I started off talking about how Bob and I had breakfast together in the morning, and how I let him pick the place because "It will be the last decision you ever get to make." That got a laugh. Then I talked about how, as they may have noticed in the printed program, that Bob and I met as teenagers when we shared the same love. We had watched the object of our interest grow and develop and talked with her father... we couldn't wait for that first touch and to spend time with her. But then we realized that we didn't have to be rivals - we could both enjoy her together. But enough about Splash Mountain...

It was a great wedding and a lot of fun. The DJ did a great job.

We stayed until the end, helping to move stuff to cars, and then went home. It was after 10.

Monday, May 1, I had taken the day off from work to recover, and so we ran some errands. Traffic was great due to the day of activism/demonstration.

I had three days of work during the week. It's a very busy time at the office. We have two seasons... busy and very busy.

Friday (5/5), we ran some errands and then ended up slipping in to Disneyland Park after 10pm so that we could enjoy the nighttime atmosphere there. We checked out the recent changes inside the Haunted Mansion (mostly good), rode Mr. Toad's Wild Ride, and then hit Space Mountain. I was actually able to find a former co-worker to check in with. That can be hard at night, thanks to turnover.

Saturday (5/6), I finished up my latest review. After a nice dinner with Kori's parents, we went to Golden West College to see Kori's sister Kirby in the role of Hedy La Rue in "How to Succeed in Business Withouth Really Trying". She was good, and the play was very entertaining. Afterwards, we joined Kori's sister Kendra and her husband Steve in taking Kirby out for dessert at BJ's, where prom season was evident.

Today, we hit church and then our small group that meets afterwards. I think it was the largest gathering we've had for our small group, and several of the women are pregnant. So, the group keeps getting larger!
Posted by Kori and Ken Pellman at 10:03 PM No comments: 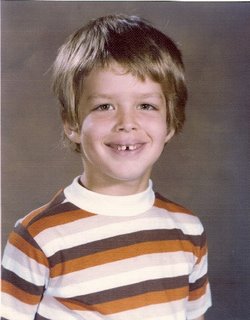 What a BABE Kori is. Thanks to her, you get to see pictures like this. She's scanning my pictures into our desktop, so you can see me in all of my young, nerdy glory, before I started looking like Teen Wolf with hair growing everywhere.

-Ken
Posted by Kori and Ken Pellman at 4:01 PM No comments: