Wow – it has been two months since our last photo update. That is because we've been keeping busy. We're still settling in to the house. With a toddler around, it takes a lot of time to do anything. Kori is very handy with fixes and improvements. She sometimes asks me to do part of whatever she is doing, but she's been doing most of the work. Let's face it – the house is her domain. That's why I have my cave. Every husband needs one. She does run her ideas past me, though.

We were also trying to get our condo rented out, which we were finally able to do a little over a week ago, thanks to help from Kori's father. We finished removing our last little tidbits from the place.

Keelie is over 17 months old now and has learned to speak a very few words, but has been acquiring American Sign Language signs at a rapid rate. She'll sign "More Oswald, please!" more than anything else. She's obsessed with that oxygen-deprived, hydrocephalic animated octopus. I’m sure you other parents in the DVR/VHS/DVD age can relate to the endless viewing of the favorite programs/movies of your child.

Keelie also sees us on the desktop computer and figures she wants in on it, so if we make the mistake of stepping away without pushing the chair in, she's on it like white on rice. She has also gotten in the habit of grabbing one of our fingers and leading us where she wants to go. If not by the hand, she will literally push against our legs, often so that we are walking backwards. She'll push harder if we stop, and will tug on our clothing if we turn the wrong way. She also brings us books and signs that she wants us to read them. She did a happy dance when she discovered that Kori had brought home more Oswald books.

Whenever we get up on a ladder or stepladder in the house, Keelie tries to climb up with us. Another little thing Keelie will do is use her sock-clad foot to "clean up" any drops of milk that have fallen from her sippy cup. And like I used to, she'll hum while eating.

As usual, we've been spending time with Kori's family when we can. We live even closer to them than we did while in the condo. We've also managed to make it to Pasadena to see my family a few times since I last wrote. 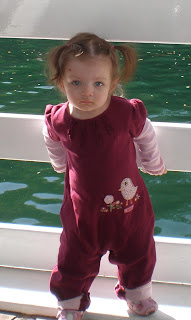 We had fun at Disneyland Park with my mother. While riding the Mark Twain riverboat, Keelie most enjoyed climbing up some stairs and then sliding back down them. 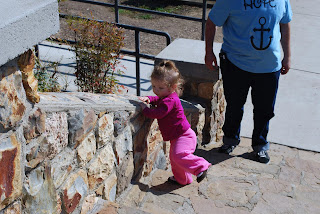 We all made it to a "mommy meet-up" at a local park. It was before Halloween, so some of the kids - and adults - were in costume. I wasn't the only father there, thankfully. Keelie again had fun running up and down steps. If we had some in our home, she’d probably be indifferent towards them. 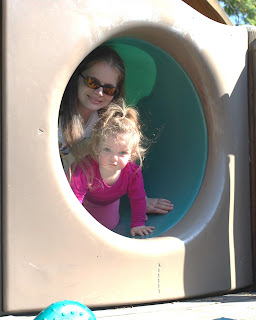 There are my two ladies! 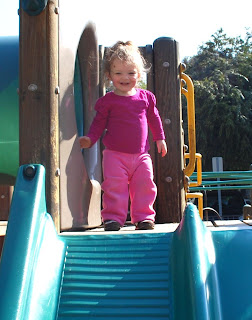 She likes the slides, but sometimes she needs added excitement. 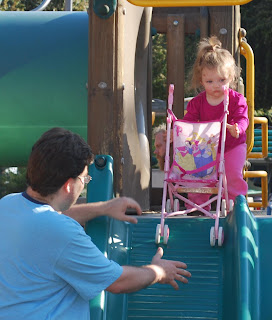 So here she is imagineering a new thrill ride. 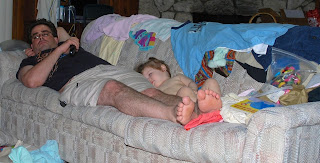 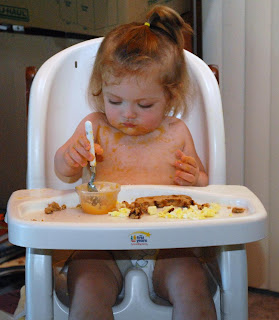 Also before Halloween, we went to a pumpkin patch with Kori's parents. 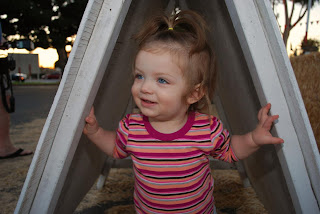 Below is Keelie trying her hand at Outdoor Vending. That's heresy to this old "jani". At least it isn't popcorn or cotton candy. 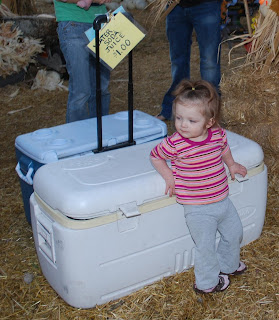 She's on the prowl!

Keelie wants YOU... to be ready to hand out candy. 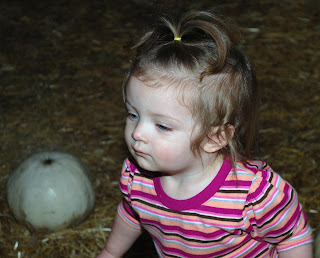 For Halloween, we went to Kori’s parents’ house. Kori was "faith", I was "hope" and Keelie was "love". 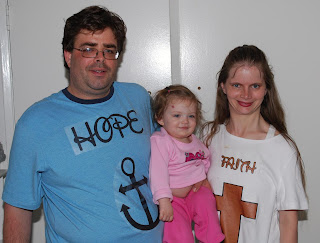 We took Keelie out trick-or-treating and it is a busy neighborhood for that. 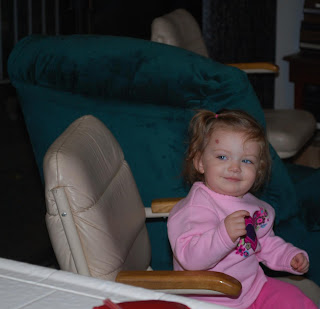 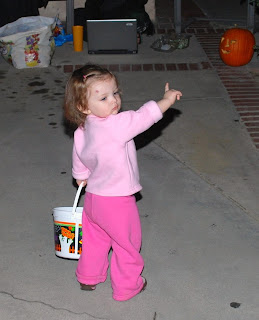 "This way to more candy!"
She would sign "candy" over and over to get more candy from the same person. When Puma offered to carry the bucket for her, Keelie let go of my hand and held on to the bucket with both hands until Puma retreated. It was hilarious stuff. 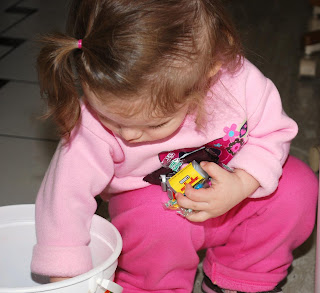 On a Sunday earlier this month, we woke Keelie up “early” and drove up to the L.A. Zoo. We were meeting with my mother and sister (Kim) so that Dr. Craig Stanford, USC professor and Director of the Jane Goodall Research Center, could give us a personal tour of the zoo. My sister won this in an auction benefiting the South Pasadena Educational Foundation. Obviously, the guy is an expert in primates and so he was able to point things out to us as we checked out the exhibits. Keelie seemed to enjoy herself a lot - mostly at a playground. It had been forever since I'd been to the LA Zoo – same for Kori. And Keelie hadn’t ever been there before. 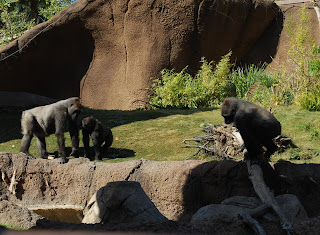 Below: Auntie Kim, Keelie, Kori, Dr. Stanford, and Nanny. (I don't know the names of the people in the above shot, but they have even more hair than me.) 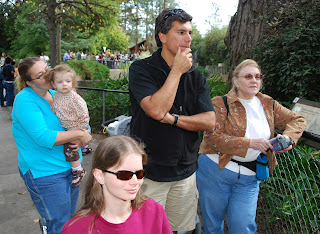 On Saturday the 15th, we had a playdate with a high school classmate of Kori's out in Murrietta, which is on the way to San Diego in Riverside county. That means that with traffic going full-speed, it takes over and hour to get there. I noted to Kori that there was going to be traffic because we would be driving right past a fire off of the 91 freeway. It was very windy, hence the fires.
So sure enough, we were crawling along on the 91 and the smoke was rising literally right off of the westbound side of the freeway, and the helicopters were flying right over us and the airplane that drops the reddish chemical was off to the side, too. These were the fires that made national news recently.
We made it out to Murrietta. We were late, but we’d made it. Kori's friend has four kids and her husband was at work. We went to a park to picnic and for the kids to play. Keelie kept running over to this large puppy, signing "dog" over and over, and the puppy kept knocking her over and wrestling with her.
As the sun came down and it was time to come home, we kept checking the news and sure enough, the 91 and the 57 were closed, so they were telling people to take the 15 to the 60 to the 605 to get back to Orange County. Instead, we took the advice of Kori's friend and drove back on the 15 toward Lake Elsinore, then got on the surface streets to take Ortega Highway. There were a lot of other people doing the same thing. That stretch of Ortega Highway is something like 20 miles, and it goes over the mountains, and is narrow and winding. So there I was, seeing the tiny lights of civilization out of the corner of my eye, but not daring to take my eyes off the car in front of me because I'm terrified of heights in certain situations and because I didn't want to slow down and tick off all of the drivers behind me or miss a turn and go rolling hundreds of feet down a steep drop.
Toddlers don't seem to like long car rides, at least not when they are awake.
Finally, we emerged in San Juan Capistrano and took the 5 north back to Anaheim. Ash was falling down everywhere. It was sad that homes were lost in the fires, but I’m glad they weren’t worse. We'll be heading into rain season here in southern California. January and February are traditionally when we're hit the hardest. Then, there might not be any meaningful rainfall for the rest of the year – which is fire season.
And now... something I had never in seen in person before... Kori with bangs... 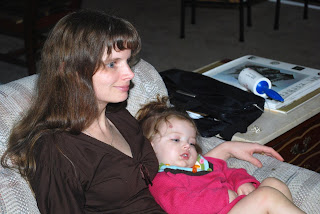 After Kori worked so hard preparing the place, we hosted Thanksgiving here for our families-of-origin. On Kori’s side, Kirby, Kendra, and Steve were able to make it, and on my side, Kim, Mike, Blaine (back from college), Macon, and my mother were able to make it. I remember all those years I worked shifts at Disneyland, either opening or closing shifts, and often had two homes to visit for Thanksgiving. The advantage of hosting this year was not having to drive anywhere, especially two or three places. We do appreciate the invitations we get, though, and driving around the southland is a small price to pay to see family and have good eats. Things went well here, especially with all of the help we got. Thanks, everyone!
Here's a shot of the Great Room. 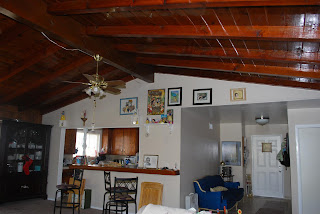 We're getting there. You can see the kitchen on the left and the entryway on the right.

Oh – and one last thing I wanted to mention that Keelie does. She climbs on top of this ball that is wedged between the sofa and the excercycle, and bounces up and down. Sometimes she has a pratfall, but she’s a tough one.
Thanks for stopping by and reading up on what we've been up to. Find us on Facebook and MySpace (see the links on the right). Go ahead and write a comment here or e-mail us at KEPellman [at] yahoo [dot] com to let us know what you have been up to.
Posted by Kori and Ken Pellman at 3:08 PM No comments: