Settling In to the New Year 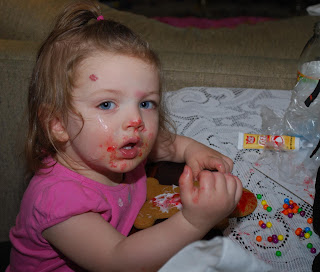 Greetings once again from Anaheim.
Actually, that photo above is from a trip to Nanny's in Pasadena, where Keelie had fun decorating a gingerbread man.
The biggest news from us lately was what we reported in our previous blog entry - that we're expecting our second baby. Other than that, we've been settling in to the new year. As she should, Keelie has been getting more expressive with her words and signs.
She LOVES playing with water - to the point of wanting to go outside in the rain. She had been protesting her showers, but when she realized that it was another chance to play in the water, she started to ask for them again. She'd readily jump into any body of water if she could - fountains, puddles... you name it.
We played it cool for the New Year celebration. In fact, here's a shot of Keelie from that evening... 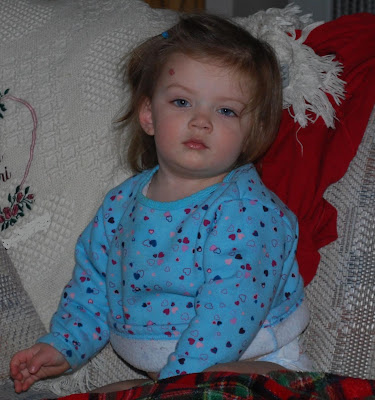 Keelie enjoys having me chase her around the furniture in the living room. If I stop, she will come back to me, grab my finger, and drag me until I start to chase her again. 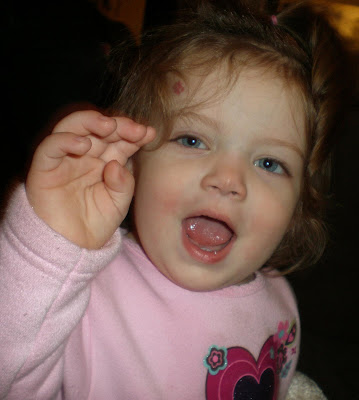 We've been enjoying short trips to the Disneyland Resort - one of the perks of living so close to the place in Anaheim. 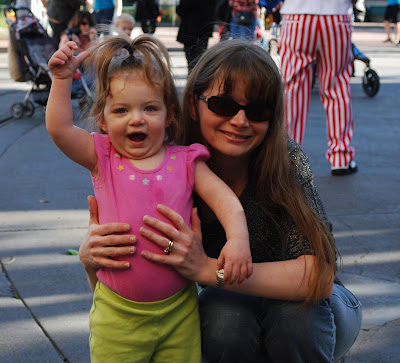 Keelie hasn't had a haircut yet, so we usually put her hair up. 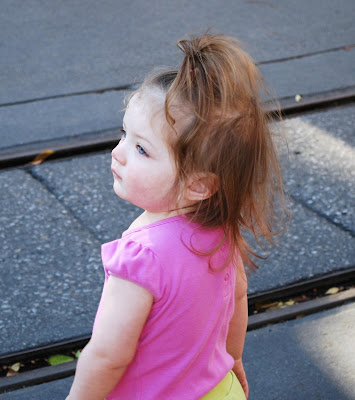 Here she is chilling at Minnie's house. 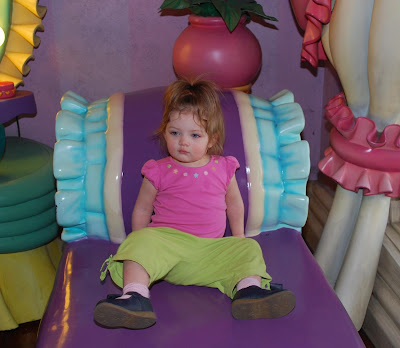 She will sign for Mickey and Minnie Mouse, whether she sees them in person or on artwork in our place. She was happy to have some one-on-one time with the Big Cheese. 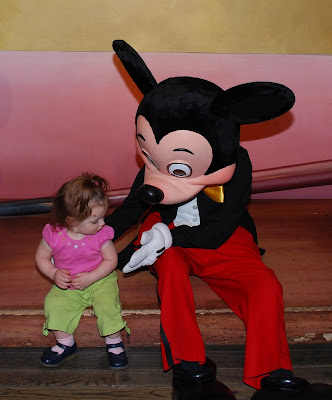 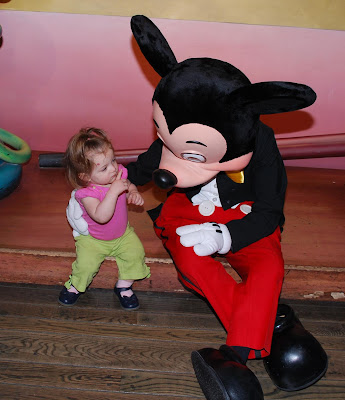 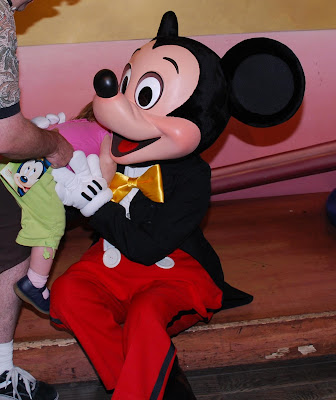 We celebrated Kori's birthday with her family, and broke the news of the pregnancy to them. 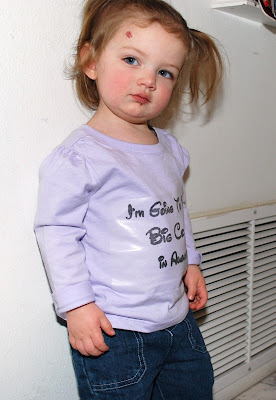 That shirt says "I'm going to be a big cousin in August" on the front. But on the back it says "And a big sister in September!" That was how we broke the news. Yup, things are going to to very interesting around here this summer.
Here's Keelie doing her best Elton John... 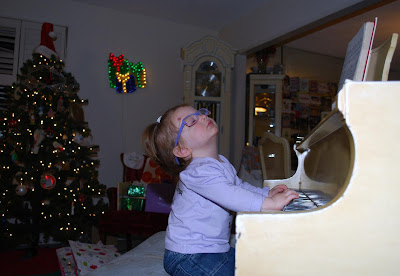 She likes playing the piano, as her favorite animated character is a piano player, too. 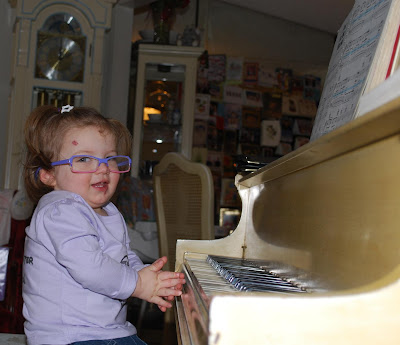 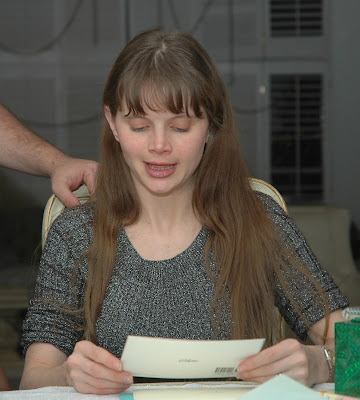 Here we are together. Keelie had a bit of boo-boo under her lip. 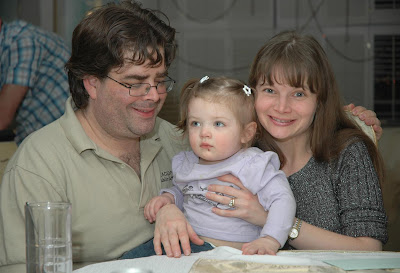 This has to be one of my favorite pictures yet... 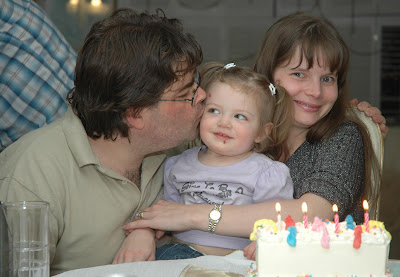 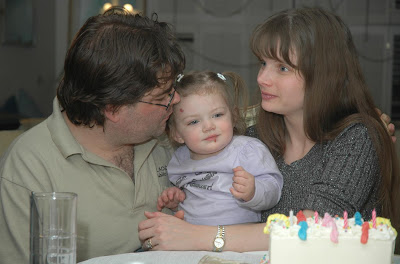 Keelie has nine actual aunts and uncles nearby, plus cousins Blaine (when he is back in town from college) and Macon, all of whom pay her a lot of attention... and that's in addition to all of her grandparents. 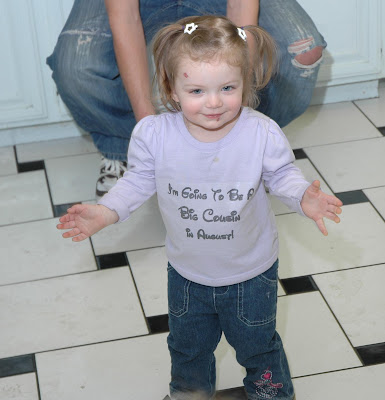 She usually doesn't mind being the center of attention. 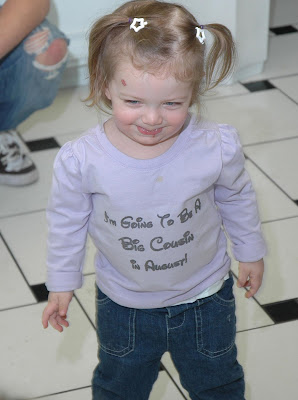 Here she is with Aunt Kirby... 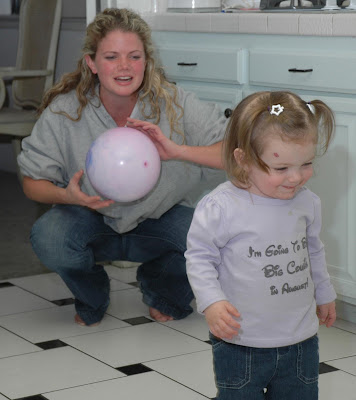 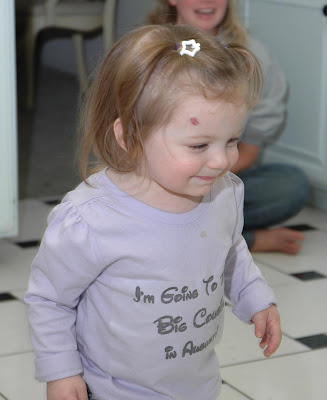 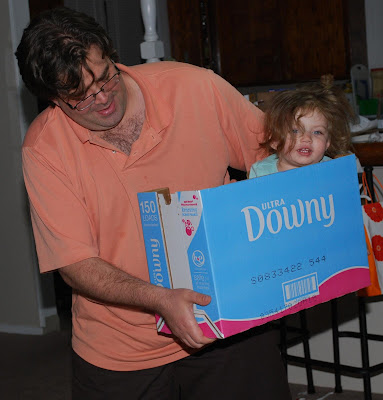 I should do this for exercise... 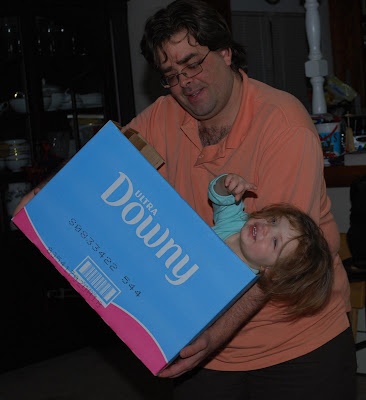 If anyone from the Downy company is reading this, you can send us a check for this publicity. 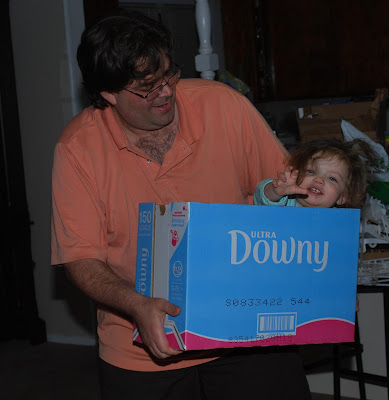 I tire of it long before Keelie, of course. 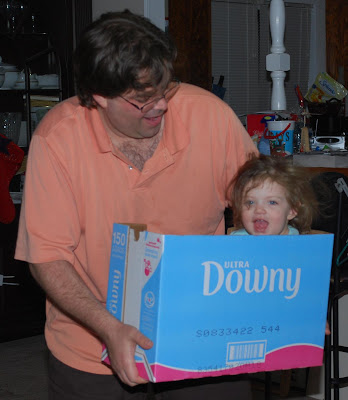 That's it for now. Thanks for stopping by again and please let us know what you are up to. You can always leave a comment here, or send us an e-mail at KEPellman [at] yahoo [dot] com. Also, you can find us on Facebook (and even MySpace) - the links are in the right column of the blog. 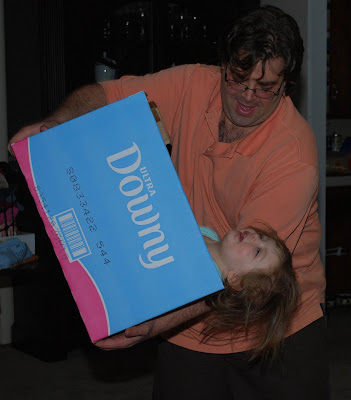 Working on the Sequel

Kori is currently in production on Keelie's sibling!

We were working on the concept, having recently moved to a new location with more space. Keelie premiered in June of 2007 to wide acclaim, and Kori and I planned for a multi-project deal when we originally decided to merge in 2004 and start up our production company.

So, Keelie is a big sister and if everything goes well, we'll all meet her younger sibling face-to-face this September when she emerges for the premiere and publicity tour.

Obviously, we are still in the very early going, but we have been trying for a few months and the hints were there and the home test said YES... so... we wanted to share the good news with you.

What makes it all the more exciting is that a couple with whom we are really close are due in August.

Just as Keelie was known as "Firecracker" (due to her July 5 due date) until we knew she was a girl, we are referring to this one as "Kringle" due to... well... you're smart enough to figure that one out without me actually spelling it out.

As always, you can reach us by commenting here or by e-mailing us at KEPellman [at] yahoo [dot] com.
Posted by Kori and Ken Pellman at 9:05 PM No comments: