It has been more than couple of weeks, so it is time for another update.

Keelie tends to wake up in the morning in a great mood, but strongly protests bedtime. 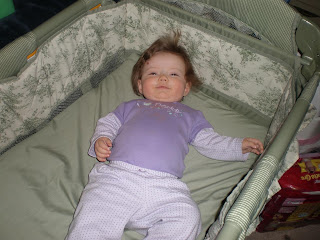 We’ve been seeing Puma & Granddaddy regularly, as they often have their kids over for dinner.

Keelie has had recent follow-ups with doctors. She’s at the taller and heavier end for her age. When she got the second part of her flu shot, she took it pretty well. Much better than getting four shots in rapid succession.

On a recent afternoon off, Kori arranged for us to drop Keelie off with Kendra & Steve (who are great at being her aunt and uncle) for a couple of hours so that we could be alone. It seems ridiculous, but that is where we are for a few reasons, including the fact that Keelie doesn’t take long naps and she’d much rather be interacting with one of us than playing with a toy.

But... she is very cute when she does nap. 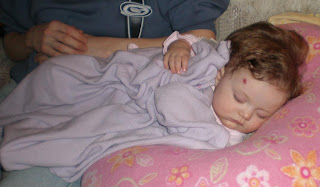 Of course, we think she is cute all of the time.

Keelie has been enjoying all sorts of “solid” foods, most of which Kori has diligently prepared from raw materials. I am usually the one to feed Keelie her dinner (Kori feeds her the other meals), and it is a lot of fun. She gets all excited and slaps her hands on the tray, makes a face as she inhales sharply, and then says "mah-mah-mah-mah", which she has taken to saying at other times, too.

Below, she sits in her feeding chair, anticipating the culinary delights. 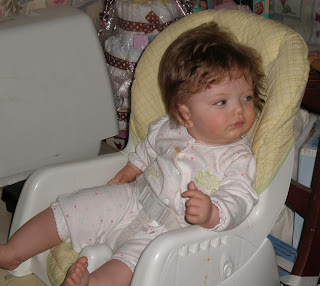 She promptly falls asleep when the sound of it doesn't excite her. 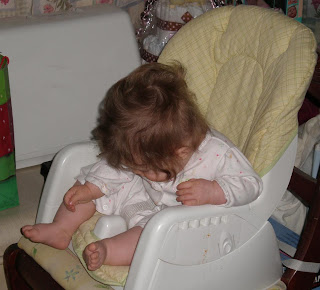 But then she perks up when she realizes that she has inherited my eating genes, and loves just about any meal! 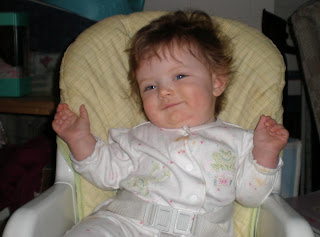 Keelie seems to be fixated on left ears. Not sure if that is because we hold her on our left sides more often, or what. She also is interested in Kori’s hair, which Kori has taken to wearing in a bun so that less of it is torn out. She is very good at snatching our eyeglasses for taste tests, and loves running her hands over our faces in general. Crinkling up junk mail can keep her entertained for several minutes.

Here she is with the drawstring from Kori's sweatshirt. 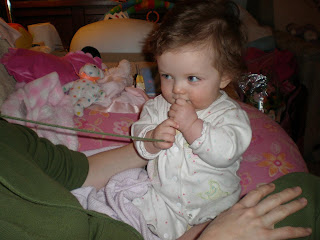 We went to babysit for Chrissy & James, who have an 18 month-old boy. Our daughter and their son got along just fine. But they really didn’t interact all that much.

This past Friday evening, we had dinner at Puma & Granddaddy’s. The highlight was when we were all standing around and Keelie said "Ma-ma!"

It had been a few weeks since my mother and siblings had seen Keelie, so we went to my mother's place for dinner this past weekend, where my mother, Kim, Vicky, and my nephews could see how Keelie had grown. I think Blaine has grown even more. He’s 17 and getting really tall, so he looks different each time we see him. 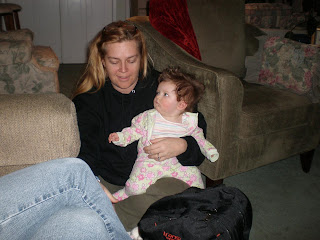 And Keelie with Kori... 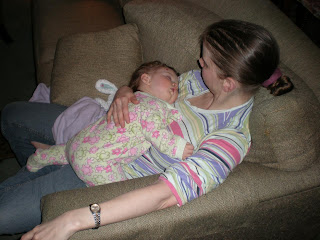 Keelie has become quite adept at rolling to get from here to there, and has finally picked up crawling. She’s not an expert crawler yet, though, often sliding on her belly or getting up on her feet instead of her knees. Her favorite thing is standing, grabbing our thumbs for balance. Lately, she has realized that she can stand up by grabbing on to furniture, too. 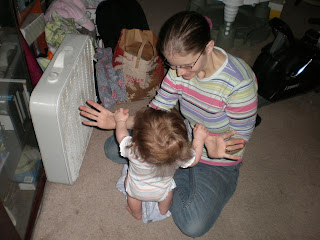 Shelby continues to adapt. She knows exactly how far away she has to stand from Keelie to avoid her clutches, as Kori noticed. 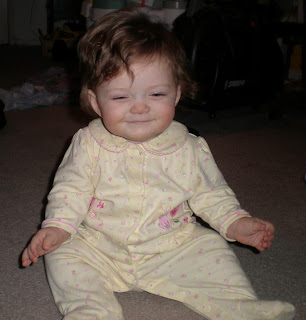 Like 100 million other people, we watched the Superbowl. One more NFL football game left, and then Keelie will have to find something else that interests her until the next pre-season. I liked the commercial with Richard Simmons.

And now, since you've been so good, here's a word from Keelie...

Thanks for stopping by. Please leave a comment here or e-mail us directly at KEPellman [at] yahoo [dot] com. We want to know how you and your loved ones are doing!
Posted by Kori and Ken Pellman at 9:11 PM No comments: