It's Been Quite a Week

We finished off this weekend with a visit to Boot Hill in Irvine earlier tonight. The place gets better and better every year. I used to help out with the operation. I certainly can't take any credit for the design and installation. There are some talented, imaginative, hard-working folks who put this together every year. The score was composed and performed by a professional composer I know and some of the sculpture work was done by another pro who does that sort of work for the film industry.

It's been quite a week.

Monday, I cleared out of my space at DPW. First thing Tuesday morning, I was doing my paperwork at ACWM. The three days I've spent there so far have been great. Seems like a great group of people working there, and I'm trying to soak up as much as I can about what they do and how they do it. My schedule has been filled with trips and classes.

Kori continues to sell on EBay. She's not doing it on a large scale, just some items here and there.

There's some other good news developing, but that will have to wait for a later time.

Let us know how are you are doing and what you're up to.
Posted by Kori and Ken Pellman at 8:48 PM No comments: 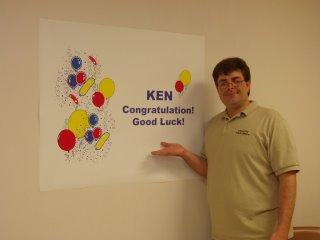 It can now be revealed that Kori was recently serving on a jury in a criminal case. The deliberations laster longer than expected, and the vote ended up being "not guilty".

She's also been keeping busy around the condo and running errands.

She drove up last Thursday to be at the Happy Hour held in honor of my promotion.

And, as of about 5:30pm today, I am no longer a DPW employee. Tomorrow, I begin my new position with Agriculture Commissioner/Weights & Measures.

Closing down at DPW was quite an operation for me. Six and a half years of accumulated work and memories had to be either filed, transferred, recycled, or boxed to take home.

Change is never easy for me. But some change is necessary.

There were some very touching well-wishes from my co-workers. I'm going to miss all of them.

-Ken
Posted by Kori and Ken Pellman at 9:05 PM No comments:

Kori has been on a special assignment (more on that at a later date, maybe).

I'm getting ready to transition to another County of Los Angeles Department. Switching departments may not big a big deal a company, but in County terms, Departments are like their own little worlds, though most are run by someone appointed by the same elected Board of Supervisors. The switch I'm making, for instance, means I will be working in a different city with a whole different set of people who are responsible for entirely different services to the public than where I was before.

Since May 1, 2000, I have been with the Department of Public Works at the headquarters tower in Alhambra. It is just down the street from where I went to Elementary and High school in South Pasadena. When I started working there, oddly enough, I was living in Fullerton, which was about 45 minutes away without traffic, which meant it was really 60-90 minutes away. Then, I moved back to South Pasadena to get closer - about 10 minutes away max - to work.

It wasn't long before I got into the media relations activities and then starting functioning as a Public Information Officer. Finally, I got married and moved in with my beautiful bride in Anaheim, which is even further away than Fullerton, giving me a long commute again.

I've been poking around for new position for a while now.

For one thing, I dropped my part-time Disneyland job in the middle of 2005, so we lost that tiny additional income and my status as a "Part of the Magic". Also, being a newlywed gets you thinking about other major life changes. Secondly, given the County's job classification system and what "items" were available in my corner of Public Works and the reality of staffing changes, I had nowhere to advance there. Finally, some of my coworkers who had become some of my dearest of friends left for other County Departments.

In addition to the people and the great work that DPW does, I like the location and I like the building itself. It was used as the location for about half of "Weird Al" Yankovic's "It's All About the Pentiums" video, and since Yankovic is my favorite performing artist, you know I got a kick out of that. DPW also has two accomplished Toastmasters International clubs, and I have been an active member (and officer) of one of them.

But, as I wrote above, it was time to take that next step. In this case, that means getting a promotion within the County, but to a new place. I have accepted a position with the Agricultural Commissioner/Weights & Measures (ACWM) as their Public Information Officer. If you're asking "What does ACWM do?", then you're making one of the points as to why they need a PIO. They've never had one, so this is a great opportunity to create something new and serve a different team of County employees.

ACWM's two main objectives involve environmental protection (which is also something DPW is involved with), and consumer protection. I had a 150-minute interview with their Director, who seems like a terrific guy, and I'm looking forward to working for him and being able to continue serving the public. That seems to be something that's in the Pellman blood.

Since I start at ACWM on Tuesday, October 24, My last day with Public Works will be Monday, October 23. That's coming up so very quickly, and there's so much to do at DPW as far as transferring my work to others. Already, I've reverted back to missing my breaks (I was actually taking them for a few weeks there) and not leaving the office on time to go home.

So, that's the big news for now.

-Ken
*It should go without saying, but I'm going to say it anyway. This our personal blog, with our personal comments. I get paid to write and represent, so if you're not paying me to write this, then it is not written on your behalf and you don't get to approve or disapprove of them in a professional capacity as my employer. The comments are clearly my personal opinions and thoughts, written on my own time using my own resources and not presented on behalf of any employer with whom I have been, am currently, or will ever be employed. If that's still not enough, go here.*
Posted by Kori and Ken Pellman at 9:25 AM 1 comment: