We Looked For Nemo 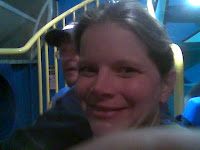 The wee hours of Sunday morning are upon us. This is a picture of Kori about to enjoy our first ride on the new Finding Nemo Submarine Voyage at Disneyland Park. A few weeks ago, we were fortunate enough to hear a ride-through of the attraction, but this was our first time riding.
I had been aboard the "last" ride of the original Submarine Voyage back in 1998, and once I was sitting in the sub earlier tonight, it didn't seem like all that long ago.
As the name indicates, the attraction incorporates the characters from the Disney/Pixar film, "Finding Nemo". If you remember the old attraction, you'll recognize that this version builds heavily on it and even has some clever nods to nostalgia, but the experience is significantly different. Clever use of video technology brings the attraction, which originally opened in 1959, to the 21st century. The subs themselves are also quieter and more pleasant for the surrounding area, as they no longer give off combustion fumes.
It's nice to have the subs back.
Unfortunately for the Magic Kingdom at Walt Disney World Resort, their equivalent 20,000 Leagues Under the Sea attraction was removed years ago, so their Nemo overlay went to the Living Seas Pavilion at Epcot.
The Disneyland attraction officially debuts June 11, and we could see preparations for the news media event.
There's not much else to report on our end. We're in the last month of the pregnancy. Really, Keelie could emerge any day now.
In the realm of minor annoyances, we experienced a DSL/phone outage of 24-hours or so a few days ago. We called India, and then they gave us a local contact, and they said they'd be over the next day, claiming that it was just our condo, and not a service outage to the area. They never called us, but our service was restored without fanfare. The only reason we knew was because of a solicitation phone call.
Regardless, our cell phones were working the whole time, so if we needed to call out we could.
Until next time...
-Ken
Posted by Kori and Ken Pellman at 11:58 PM