The End of the Year

Welcome to our last update of the year. Our Christmas letter is below, after this short update covering this past week. 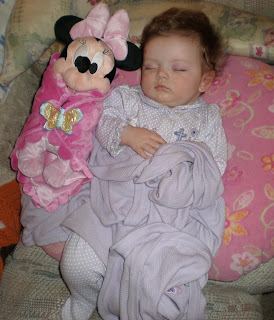 Last Sunday, Nanny came down to see Keelie, as she hadn’t seen her in a while, partly due to a trip to central Florida. Keelie was really happy to see her, and while Keelie was off of our hands, we got some chores done.

Keelie reached SIX MONTHS OF AGE during the week! Yay! That meant another trip to see her pediatrician. Our precious little girl was upset by the shots, but was over them quickly. Her reaction was subdued compared to her screaming getting her 4-month doses. Keelie also checked in at the 50th percentile in height, so she’s smack dab in the middle of average. Amazingly, though, she has more than recovered from the rough going early on with her weight. She’s now in the 75th percentile! There’s proof for sure that she has some of my blood. 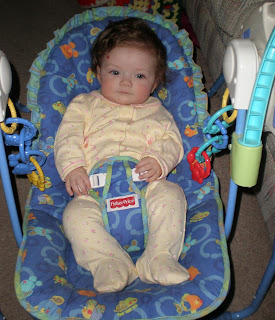 Here's an example of how Keelie has grown. That picture above is Keelie at 26 weeks. The one below is Keelie at 10 weeks. 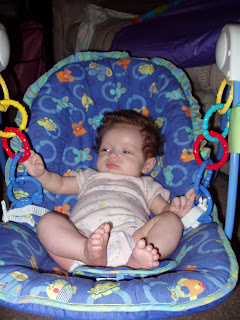 Here are some pics of Keelie in her bassinet. 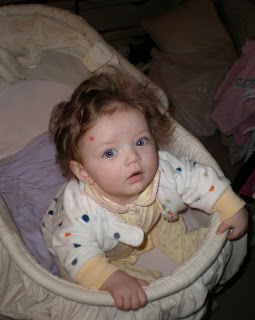 This is where she has been sleeping. 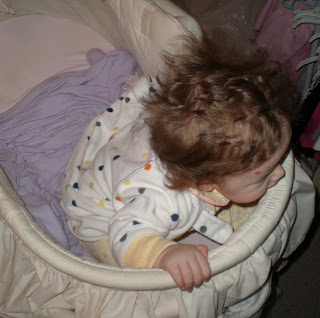 Everything goes in the mouth. 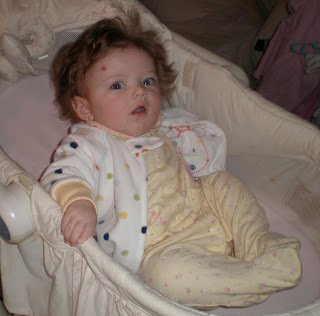 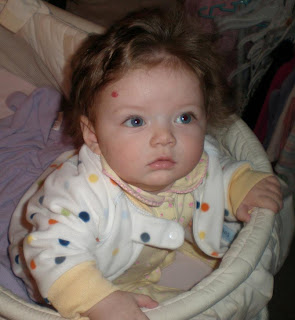 Friday night, we started Keelie on “solid” food. Up until now, her diet had been almost nothing but breast milk. 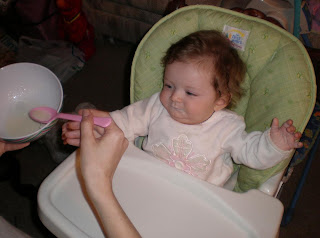 There have been signs that she is mentally ready for variety. For example - she used to spit out some of her medicine if we weren’t careful, but now she not only will happily drink it, she will grab the oral syringe we use to give it to her and she’ll hold it herself. 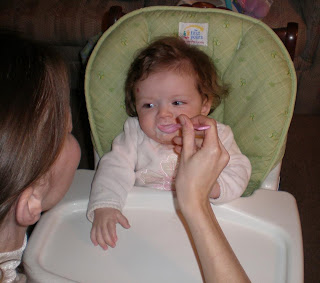 She’s also reaching for our glasses and plates whenever she can. In this video below, you can see her trying to grab the spoon.


So that’s what we’ve been up to since our last update. Here’s our end-of-the-year message...

The Year in Review 2007: State of the Pellmans

We’re not sending out a lengthy Christmas letter this year, since everything we’d put in it had been right here in this blog, and as you’ve read, we’ve been occupied with the baby. Here’s our brief-as-can-be end of the years message...

Greetings to you and your kin!

The first half of the year was mainly about preparing for the arrival of Keelie. The second half of the year has mainly been about taking care of Keelie. Any parents who remember having their first child can relate, I’m sure. It is an event that changes everything. Keelie has five grandparents, nine actual aunts and uncles, and two cousins in the area, many of them right here in Anaheim. So, there has been lots of visiting with family.

There hasn’t really been too much excitement.

Professionally, I settled into my new position.

Didn’t have as much time for freelance writing.

Throughout the year, we got together with multiple times with three friend groups. Homecoming (our friend group from church) officially disbanded this year by absorbing into a larger group that has official meetings at church. We hope to still get together with everyone from Homecoming for lunch or something here and there. One of the families moved to Africa, so it is a little harder to meet up with them. Then there are the current and former Disneyland cast members that Donna keeps going as a group by mailing out invites to monthly get-togethers. We’ve made it about every three months or so. Finally, there’s a group of Disney enthusiasts (some of whom are professionals within the corporation) who get together for dinner and home theatre entertainment and sometimes field trips. We’ve only met up with them twice since Keelie was born, because the home theatre sessions aren’t really at the time or place for a baby. Each of these three groups have been great social support and fun and needed adult contact.

So far, there have only been three times we have gone somewhere without Keelie. The first was the “Weird Al” Yankovic concert in October. The second was the “Snow White and the Seven Dwarfs” anniversary event in November. Finally, there was our anniversary this month.

We did lose a family member - Kori’s paternal grandmother, who had been beyond interaction for a while. And, one of my heroes who I had been fortunate to have casually known over the years, died suddenly at a fairly young age.

Our legal matter, in which we are the plaintiffs, is continuing with the possibility of being resolved in 2008.

So, it wasn’t a big year for changes other than Keelie’s arrival, which was change enough!

Kori is a terrific mother. It has been such a pleasure to watch her take care of our little girl. Four years ago, Kori and I hadn’t even met in person yet. And here we are, married and proud parents.

Thanks for reading and thanks for your love, friendship, and support throughout 2007. We look forward to 2008 and pray the New Year will be a great one for you, full of health, happiness, and His love.

Yay! Congrats on a wonderful year!

I've been enjoying your blog and seeing the progress you've made parenting Keelie. What a cutie and such a head of hair :)

My brother Bruce is here for a few days and he also got your blog update and we both want to wish you and your family a very Merry Christmas.