It’s rushing around time, since we’re almost to the end of the year. It gets dark so early. I’m more of a summertime person. That goes back to my swimming and bodysurfing days. Kori is much more in to the Christmas season and all of the decorations and such. I’ll be glad when we pass up the Winter Solstice and the days can grow longer again.

That's Keelie sleeping off her milk coma. You can see the bottle on the left of the screen. Actually she tends to keep her naps really short.

Keelie continues to grab everything within reach and hold on to it, if not gum it. She loves using my thumbnail to scrape her gums. We think she’s teething, but then again we’ve thought that for a long time now. She loves her blankets. Remote controls and cell phones are often objects of her attention, since they seem to be so important to Mommie and Daddy. She’s been sucking on her fingers, and more and more is picking up thumb-sucking, though she likes keeping her hand/fingers parallel to the floor as she sucks on her thumb. Is that gangsta style?

She’s always had strong legs, to the point of being able to “stand” as long as we hold her so she doesn’t fall over. Her leg strength is also what allows her to suddenly push off of whoever is holding her and to try to take a dive, or squirm off of their laps in an attempt to reach the floor. She attempts to do pratfalls quite often by sitting up and rolling over.

Keelie has acquired a high-pitched squeal. It isn’t as pleasant as her babbles, but we suppose she has to explore her full vocal range.

For some reason, if we refer to the child safety seat for the car as the “Captain’s Seat”, she doesn’t mind going in to it. She used to pitch a fit when we told her we were putting her into “the car seat”. Definitely a first child. She’ll love getting siblings to boss around. Er, uh, I mean for whom she can be an example.

You wouldn’t know it from these pictures, but she does laugh and smile.

We bought a new digital camera to replace the one that was stolen in Philadelphia. No, we still haven’t so much as received a phone call back from National Car Rental at the Philadelphia Airport. Thanks, National. But on the bright side, American Express went ahead and covered the loss, which is cool. Yay, American Express!

Last Sunday afternoon, we made a Disneyland visit with Keelie, just as it started getting dark. We didn't take the stroller or wheelchair, but rather I carried Keelie in one of those chest-snuggly things. She was facing forward this time and it was the first time she was there awake. She held on to my thumbs most of the time. We just went in to walk around a little, say hi to a few people, check a couple shops, and ride the holiday version of It's a Small World. 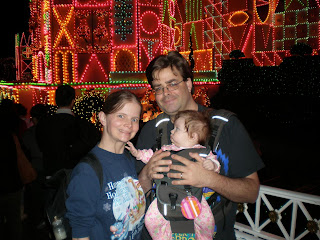 For some reason, the camera flash made it look like I was wearing neon (Kori says it is for safety.). Can you spot the milk bottle in that picture? 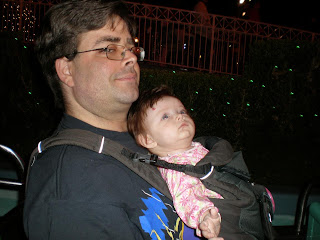 For those of you who don’t know, Disney has always made a very big deal about the holiday season, but Small World Holiday started up ten years ago. I already wrote about the history of Disneyland holiday celebrations here. 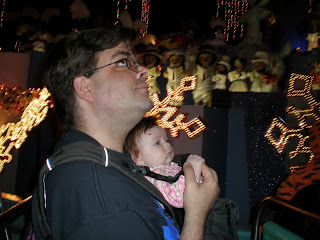 This picture below is Keelie at 23 Weeks! 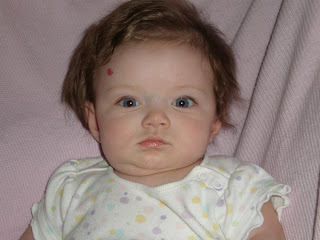 She seems a little surprised. Maybe she was still recovering from Small World? 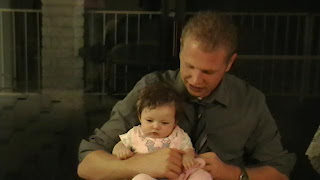 That’s Keelie with her Uncle Troy. 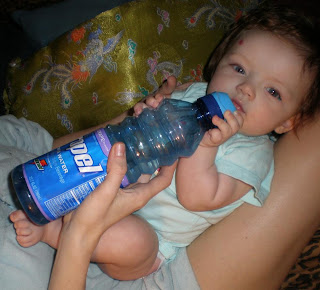 I think Keelie is signaling that she’s ready for a larger bottle. (It’s closed.)

She’s able to sit up on her own, but after a short while will attempt some stunt. 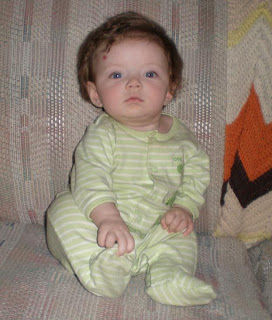 Yesterday, we went shopping at Wal-Mart, and we happened to bump into Keelie’s Puma and Aunt Kirby. I would have found that to have been such a fluke, only I know of people who have bumped into each other on the other side of the world. It’s a small world, indeed.

Here’s one of the things we got her at the store. I put it together and we stuck her in there, and immediately she picks the least interesting thing as the thing on which to focus. 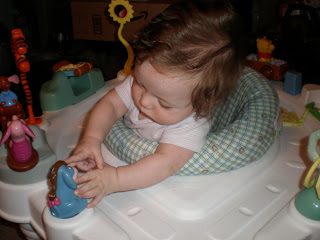 Finally, here’s some video Kori took of Keelie babbling, since pictures might not be enough for you to enjoy.

Thanks for stopping by. Comment here or write us at KEPellman [at] yahoo [dot] com.

There are lot of parties and get-togethers coming up. See you there!
Posted by Kori and Ken Pellman at 8:52 PM